Often, in the modern world, particularly Westernized society, we celebrate so many holidays, which, in essence, just turn out being an exercise in retail therapy and we forget  the origin of the ritual of celebration.  Halloween, or Dia De Los Muertos, literally, "Day of the Dead", celebrations in Mexico can be traced back to a precolumbian past. Rituals celebrating the deaths of ancestors had been observed by these civilizations perhaps for as long as 2,500–3,000 years.[3] In the pre-Hispanic era skulls were commonly kept as trophies and displayed during the rituals to symbolize death and rebirth.
The festival that became the modern Day of the Dead fell in the ninth month of the Aztec calendar, about the beginning of August, and was celebrated for an entire month. The festivities were dedicated to the goddess[4] known as the "Lady of the Dead", corresponding to the modern Catrina.

So, just when we think the meaning of Halloween means trick or treating, dressing up in kinky costumes (the part I like) or other superficial activity, when we step back and understand that it is really a day of remembrance of our loved ones who are no longer on earth with us.

Many of you that know me personally know that I study ancient goddess culture and rituals.  I collect Goddess figurines and wear them as jewelry from a few famous jewelers, of which Robert Lee Morris is one. His figurine in silver, is more of the Venus figure, and is very voluptuous, a symbol of fertility.  He has a cool studio in SOHO, New York City, and has spent his fair share of time in New Mexico.  It is interesting to note that most goddess rituals refer to woman as a figure of strength and fertility.  I found it interesting that goddesses are also known by the "Lady of the Dead", as in the Aztec society, as cited above.  I also own a pendant from a jeweler by the name of Nomi, in Santa Fe, who designs goddess figurines in silver, "Bird-headed snake goddess". I bought my first goddess figurine from Nomi about 15 years ago, long before I became the popular internet persona I enjoy today.

The  bird-headed snake goddess has been found in many ancient archaeological digs, as well as prehistoric rock art.   There are a lot of common themes among goddesses amongst many cultures, as well as "origin stories". 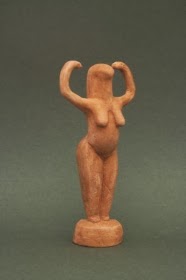 Egypt, 4000 BC
This statue is from Egypt, 4000 BC, but the imagery is far older and the motifs were common throughout Africa, Asia, and Europe. Snake Goddesses represent rebirth and renewal; as the snake sheds it skin, so the soul is reborn. Snakes are dualistic; they can be maternal in their protection of crops from vermin, but also threatening and dangerous.
They also represent sexuality, as seen in the curving, fluid nature of Her spine. Her bird head represents Her connection to heaven; this Goddess is both the Earth Mother, and the Queen of the Skies. Her snake body is of the maternal earth, and her bird head is wisdom and the sky.
She raises her arms upwards in an act of worship, reminding us that Goddess and worshipper, human and divine, are one.

You may wonder why I am so intrigued by goddess culture.  It is an ancient practice amongst many societies of people, but over time, and with the influence of modern religion, the focus of worship has been on a paternalistic, masculine figure.  I think modern religion has lost sight of how valuable and precious women are to the world.    Women are the beings that give birth.  Even if they do not have children, they can exploit their warrior strengths, or engage in other care-giving roles to their respective communities.  It is truly in women's nature to give birth, whether literally or figuratively.  People ask me if I have any children, and I reply, gleefully, "No!  All men are my children".  And, I know this to be true, as my passion in life not as the "Goddess of Fetish", but as Amber DeLuca, to take care of many men that cross my path in life. It is my mission--often times to a fault.  I would not have it any other way.

When I wear my bird-headed snake goddess pendant, people ask me if it is a bodybuilding figure.  It does look like a front double bicep pose.  When I explain it is an ancient goddess, they are intrigued.  I am not heavy into "ink" or tattoos, as I believe that pure, plain unmarked skin is the ultimate hallmark of beauty, but I did get the bird-headed snake goddess on the back of my neck, a very discreet place unless I have my hair up, about three years ago.  I had the artist make her resemble more of my body type, and that is with broad shoulders, abs, full sweeping legs, and much bigger breasts that sit higher on the chest.  I got the tattoo for two reasons.   At that time in my life, I was at a crossroads.  I still strongly identified with my fierce independence and taking care of all men as the "Goddess of Fetish".  But also, I felt that I would explore my ability to actually give birth to a child.  As things worked out in life, I found that I was more deeply committed to being a wild tigress, a wild woman, and I realized a child would more than likely burden my ability to be wild, and stay true to my nature.  The tattoo is symbolic to me because it has a dual significance--just as the goddess figures of many ancient societies.

Here is a poem a lovely fan sent to me this evening, which inspired me to post in my blog.  I have been wanting to write for you for a very long time, but I get so immersed in my training and productions that I cheat myself out of the pleasure of writing, and letting you get a glimpse into my private world and what motivates me.

Amazed by the strength of you
So charmed by all you say and do
On Halloween Day, the celebration of fright
You lifted me up to your delight
I was put under a spell, my feet not touching the floor
You squeezed me tight against your core
This night full of black bats and a distant owl
Oh Amber, you did make me howl
A time of costume parties and candy pleasures
Your friendship and bear hugs, I do strongly treasure
Amber
Posted by Amber DeLuca at 5:43 AM 1 comment:

One of my dear friends, Kortney Olsen, "KO",  a tribal member of the strength and bodybuilding community has a very powerful message to send to today's young women.  I have known KO for about four years now.  She has always been a spitfire, a ball of pure, feminine raw energy.  She grew up as a troubled youth, and faced many demons with drug/alcohol addiction and suffered sexual abuse.

KO has never been one to comply with mainstream societal standards in either body type, expectations, or mindset, which is why I have always admired her so much, because I never have either.  She is channeling her energies in helping young women to think like powerful women.

KO leads by example.  Plain and simple.  She leads a healthy lifestyle, and "walks the talk".  Please go to the following link and make a contribution to her project.  KO's long range goal is to bring the program to the USA after she has launched a successful campaign in Australia, and she has enlisted my help.

WE CAN CHANGE THE WORLD! a preventative, seminar series for teenage girls to beat the epidemic of issues they face, and create a generation of female leaders.

Yours Truly,
Amber DeLuca
Posted by Amber DeLuca at 2:42 AM No comments:

Poem from a Friend

A dear friend, who is a musician/writer, sent me an email today.  I am both honored and flattered by his elegant prose.  Here it is:

The simplicity and rhythm astonished me, but most importantly, the truth in every word.  The poem reminds me of how each of us on the planet have certain gifts, and, perhaps the greatest sin of all, is to not know them, and if we do know what these gifts are, fail to share them.  What a beautiful reminder to live life mindfully each moment of every day. 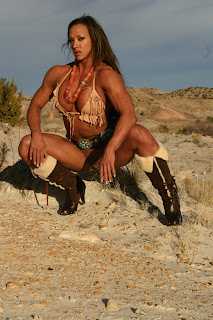 Posted by Amber DeLuca at 2:01 AM No comments: 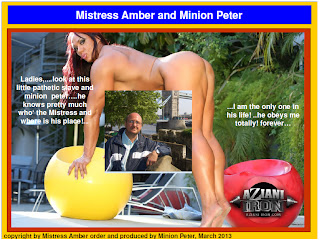 Every so often, I will admit men that have paid their dues to me, into my inner circle.  You may ask, "What does it take to become Amber Steel's Slave/Minion?" There are many ways to serve me, all you have to do is correspond with me privately and I will advise you of the necessary steps.  I have many needs and desires that need to be met.  The nature of our very existence on earth is based on interdependence.  As much as you may have fantasies of serving me, I have fantasies of you serving me.  For the longest time, I thought life was based on independence, and that is the very essence of understanding your true identity.  You must first achieve an independent spirit/lifestyle in order to appreciate the true gift of life, and that is interdependence with others.  Learning to live a life respecting others, nature and animals on the planet, and not harming anyone is the most important thing.  And, walking in beauty in all that you do.  Walking in beauty means doing everything in a good way, and taking the moral high road.  Not getting angry at petty things in life that do not matter.  Not arguing for the sake of argument with your friends, family or lovers.  I live every day as if it were my last, and I always express my gratitude and love towards those in my inner circle.  You never know what tomorrow brings, if you will even survive.  So, it is important to settle all matters, and do not hold grudges as that stores negative energy, trapping your heart and soul for the real zest in life.  It takes a long time to walk through life to learn how not to judge others and be so critical of others' lifestyles and openly accept that everyone is unique and that is the diversity and beauty of life, and also makes us stronger as a human race.  We are all one family.

You may look at the photo above and laugh to yourself that this man is either very lucky and fortunate or a fool.  He is neither.  Contrary to the negative connotations of being a slave or minion, it is all about power exchange.  It is an equal relationship, and does not mean I am abusive towards Peter.  The word slave/minion merely means he will serve me at all costs, and puts me above anyone in his life.  I did not ask him to do this, he did it upon his own freewill.  Which is very different from the Western definition of slavery.

How Peter serves me is a very private, but honorable matter.  I am honored to know Peter, and accept him into my inner circle.